We will collect an exhaustive sampling of WI land mammals, for reconstructing their phylogeny (DNA, ancient-DNA, and morpho-anatomy), based on published proxies and new data regarding living, recently extinct, and fossil taxa. Paleontological fieldwork will be undertaken in Trinidad and Tobago, St-Martin+St-Croix (near GA) and La Blanquilla (near South America), to enhance the meager fossil record from the LA (MacPhee, 2009). Taxonomic groups of interest are sloths, platyrrhine primates and rodents. All these data will allow for better constraining phylogenetic frames of their Caribbean representatives. This integrated work (phylogeny + paleontology) will feed alternative hypotheses likely to best match the biogeographical distribution of WI mammals, in terms of pathways (GAAR vs. LA), geographic origin, timing, and biogeographical processes (vicariance/dispersal/island hopping). Any results from this task will be a primary input for the Task 5. 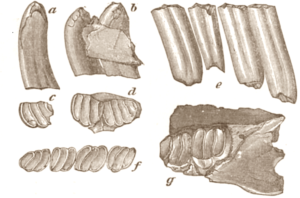 – Geometric morphometrics (all specimens). These non-destructive methods are complementary to phylogeny-based methods. As such, they are either likely to test phylogenetic hypotheses or to bring further information regarding biogeographical patterns. Specimens will be photographed in museum collections, and processed through photogrammetry (Agisoft Photoscan software).

Deliverables: Mammalogists and paleomammalogists of our consortium will provide comprehensive and time-constrained phylogenies for platyrrhine primates (three‒six extinct species; MacPhee, 2009), sloths (~15 extinct species; Pujos et al., 2017), and rodents (11 living and 35 extinct caviomorph species; ~15-20 extinct muroid species). These phylogenetic results will deliver a key input for the Task 5, to be confronted with results of other tasks (geological data and tectonic models). This task will have a positive return to society, in disseminating knowledge about mammalian history in LA, before and during Amerindian times (Caribs), and after the arrival of Europeans. This will allow for providing first-hand information for pupils, students, and civil society from LA about introduced mammals and their bearing on past/recent/future Caribbean biodiversity as a patrimony to care about.

Risk assessment: From a (paleo-)mammalogist perspective, GAARAnti is a risk-taking project, as very few fossil mammals have been discovered so far in LA. The virtual lack of fossil record in LA/Aves Ridge islands may be then confirmed a posteriori, if no fossil specimen of interest is unearthed during GAARAnti. However we are confident in our ability to increase the knowledge of the mammalian paleodiversity from LA: e.g., a preliminary one-week long fieldtrip has taken place in February 2017 with the help of local amateurs and has confirmed the occurrence of fossil mammal remains (hutia rodents among others) on all islands from the Anguilla bank, which is particularly promising. DNA degrades also faster under tropical conditions, which may somewhat discard analyzing some non-living specimens, either stored in museums or found during GAARAnti. Phylogenetic works may be complicated as DNA degrades faster under tropical conditions. However, thanks to loans, we have already obtained several subfossil samples (rodents, sloths), some of which have already been successfully sequenced through preliminary experiments, ensuring the feasibility.